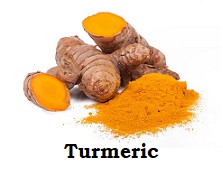 Turmeric is used in many cultures as a regular addition to daily cuisine, due to its preventive and restorative properties.  Studies have shown turmeric has antibacterial,

Turmeric (Curcuma longa) is a yellow spice widely used in Southeast Asia. It originates from India and has been used as both medicine and food for centuries. This relative of ginger is one of the main ingredients of curry powder. The active medicinal ingredient in turmeric is called curcumin, the natural pigment that gives turmeric its yellow colour. Curcumin has increasingly come under the scientific spotlight in recent years, with studies conducted in the world’s leading universities, investigating its potential health benefits. Accumulating evidence suggests that curcumin is a promising preventive agent for a wide range of diseases.  Here are some of these findings:

Turmeric and Cancer:  Studies have been conducted on the turmeric and cancer connection. They reveal that turmeric can induce a process that triggers the self-destruction of cancerous and damaged body cells. Given its antibacterial properties, turmeric is beneficial in treating many types of cancer, most noticeably breast cancer, colon cancer, lung cancer and leukaemia. Rodent studies at the University of Texas indicate that curcumin inhibits the growth of a skin cancer, melanoma and also slows the spread of breast cancer into the lungs. Researchers from the University of South Dakota have found that pre-treatment with curcumin makes cancer cells more vulnerable to chemo and radiotherapy.

Turmeric and Liver Function:   The liver helps by detoxifying your blood through the production of enzymes. These enzymes break down and eliminate the toxins found in your body. Taking a turmeric supplement or using turmeric recipes increase the production of these vital enzymes, thus increasing liver function. Curcumin also seems to delay liver damage that can eventually lead to cirrhosis, according to preliminary experimental research at the Medical University Graz in Austria.

Turmeric For Arthritis:   Due to turmeric’s anti-oxidant and anti-inflammatory properties, turmeric health benefits provide relief to those suffering from moderate to mild joint pains. Arthritis patients using turmeric for arthritis were found to benefit from reduced morning and evening joint pains. It has now become a natural remedy for arthritis sufferers and provides significant pain relief while also increasing walking speed for patients.

Turmeric and Wounds:   As an anti-bacterial and anti-inflammatory agent, turmeric works to heal wounds, cuts and other skin injuries. Using a saucepan, boil coconut oil and add a small amount of turmeric to it. Mix the two together, turn the stove off. When it is no longer too hot to touch, use a cotton swab to apply some of the mixture to the wound. Saving the extra oil in an airtight container allows you to use it in the future without needing to go through the boiling process again.

Turmeric and Alzheimer’s:   Brain inflation is suspected to be one of the leading causes of Alzheimer’s disease. Studies done with turmeric have shown that one of the major turmeric health benefits is helping to prevent Alzheimer’s disease. Turmeric anti-oxidant and anti-inflammatory properties might help to prevent or delay the 7 onset of this ruthless disease. It is believed that turmeric blocks the production of IL-2 protein, which is known to destroy the protective sheath found around the nerves. Epidemiologists have hypothesized that turmeric, as part of daily curries eaten in India, may help explain the low rate of Alzheimer’s disease in that country. Among people aged 70 to 79, the rate is less than one-quarter that of the United States.

Turmeric and Cardiovascular Disease:  Unhealthy cholesterol levels are the primary cause of most cardiovascular disease. When cholesterol oxidizes, it builds up on the walls of body cells. Turmeric contains vitamin B6, which regulates homocysteine levels. Homo-cysteine is directly responsible for damaging body cells. Through interaction with the liver, turmeric lowers the cholesterol levels in the body, which aids in preventing most cardiovascular diseases. Daily supplements of curcumin may benefit cardiovascular health to the same extent as exercise for postmenopausal women, says new data from a clinical trial conducted in Japan. Vascular health, as measured by flow-mediated dilation (FMD), improved equally in groups of women receiving the curcumin supplements and those receiving aerobic exercise training, according to findings published in the journal Nutrition Research.

The National Institute of Health USA, lists 24 current studies on the effects of turmeric and its chief active component, curcumin. Such studies raise the question: Which is better to take: whole turmeric, generally used as a powdered spice with food; or curcumin, which is usually taken as a supplement? According to Dr Andrew Weil, “Each has been shown to have health benefits but unless you have a specific condition such as inflammatory bowel disease, I favour using turmeric (especially in cooking) rather than taking curcumin pills. This reflects my general belief that, until proven otherwise in head to head studies, a whole plant is usually a better choice than isolates of a plant. On the other hand, curcumin appears to have a more rapid and dramatic effect, and may be the better choice as a therapeutic (rather than a preventative) preparation.”